A visionary voice in environmental equality and sustainable economic development for low-status communities, her work emphasizes talent-retention and harnessing resources that value diversity within these communities during the current trend of re-urbanization.

Beginning with a fateful daily run through the neighborhood with her dog Xena -  that ultimately led to the creation of Hunts Point Riverside Park in the South Bronx - Carter has built a career rooted in her passion to better her community, and others like it.

A young woman who once believed achieving success meant she must leave the place where she was born and raised, Carter began to recognize the value and potential of the people and spaces around her. In 2001, she founded Sustainable South Bronx (SSBx)

out of a desire to advocate and promote green development, green job training, and environmental justice in her neighborhood. Her dedication led her to become a MacArthur “Genius” Fellow, Peabody Award-winning broadcaster, and TED Speaker, among other accomplishments.x

Carter’s inspiring Keynote Address focused on her philosophy that “You don’t have to move out of your neighborhood to live in a better one,” with a discussion of how sustainable development, environmental equality, and a clean economy are in the best interest of everyone’s future.

Low-status communities often feel overlooked by the “green” movement and the trend toward healthy, sustainable environments in American cities. Historically, large polluting industries such as energy generation, toxic waste landfills, and major transportation have been concentrated near the poorest communities in our cities, which bear the most severe environmental costs.

Carter builds a metaphor for communities as ecosystems. She describes low-status communities as “monocultures,” lacking diversity in economic developments and opportunities. Economic inputs in these spaces are dominated by uses such as dollar stores, pharmacies, fast food, and payday loan centers. There is often a major lack of “third places” - spaces outside of home and work that promote community connection, such as cafes, parks and libraries. This concentrates poverty and everything associated with it, such as poor health outcomes, higher rates of crime, lower educational attainment, and unemployment.

These communities are not sustainable because, as Carter says, “when you lead people to believe there is no value in the community they were born and raised in,” the space becomes vulnerable to speculative investors seeking to capitalize on the value of the community’s assets, without giving residents a voice in deciding what the greatest needs for the community are. 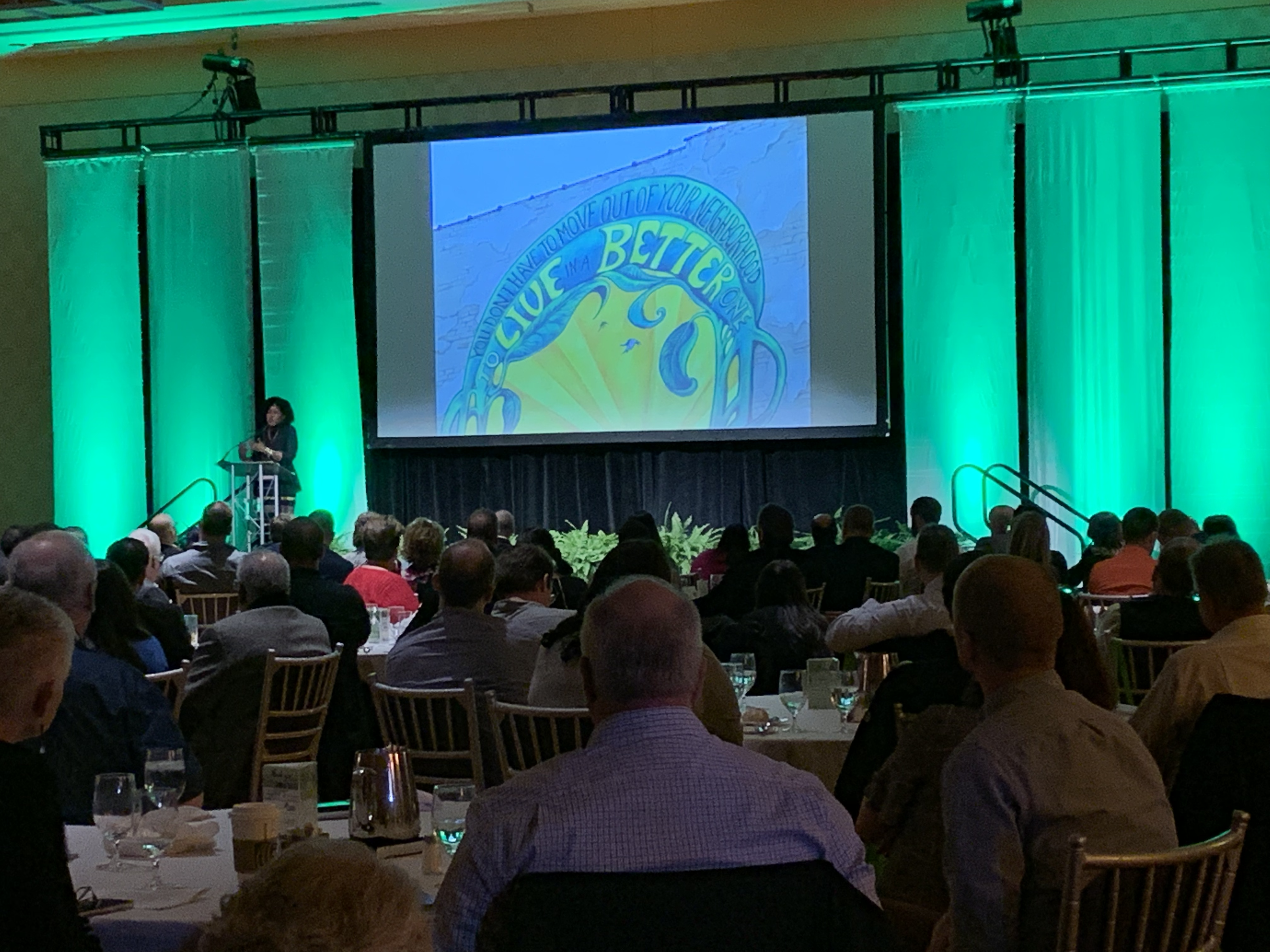 Through examples from her South Bronx neighborhood, Carter delivers insight on how to “flip the dynamic” and disrupt the cycle of economic and environmental injustice in low-status communities. By reimagining an overlooked space in her neighborhood that was being used as an illegal dumping ground, Carter was able to rally community support and earn grant funds to clean up the space that would eventually become the Hunts Point Riverside Park. The project addressed a twofold need: rid the community of a dangerous blighted space, and to create a public green space to promote community and recreation. “Good uses drive out bad uses,” and good uses promote more good uses by showing people the value and potential of the place where they live.

Just as biodiversity is vital to the health of ecosystems, a diversity of land and economic uses are vital to a sustainable community. Community leaders and stakeholders can encourage development based on local needs by creating opportunities for residents to have a voice in the conversation surrounding future development, and connecting aspiring business owners and homeowners to resources that will aid in their success.

Carter encourages visionaries and developers to seek out the less obvious community leaders, who may not be present at public meetings, but who have deep networks and insight in the community, to identify market opportunities which can meet the community’s needs while generating jobs and wealth opportunities.

Carter wrapped up the plenary address by reiterating her overall message, that empowering underserved communities to complete projects which contribute to healthy and diverse community ecosystems can show people they don’t have to move out of their neighborhood to live in a better one.

Summit attendees had the opportunity to engage in an afternoon workshop presented by Carter, in which she provided a framework for success for individuals or groups trying to bring a policy, product, or service to a market. Carter is known as a visionary with the ability to see an idea through to reality. Through examples of successes and failures from her own work, Carter laid out the steps to put an idea on a proven timeline of steps to complete in order to bring it to reality.

Session participants were invited to share their project ideas, at any stage of development, as examples to walk through the outlined steps with the group. Carter then led a constructive discussion, where the group first discussed and brainstormed the potential needs that each volunteer’s idea may address, and then followed the outlined steps to think through how the idea may become reality.

Each idea brought before the group initiated impassioned and productive discussion which illustrated the goal of the workshop: to demonstrate the power of putting an idea into a space for discussion, opening it up to different perspectives and criticisms which help the idea grow into something sustainable that successfully serves the need it sought to address.

Carter’s philosophy and approach to urban revitalization are pertinent here in the State of Michigan at a time when our cities are following the national trend of re-urbanization and neighborhood revitalization. The State’s two largest cities, Detroit and Grand Rapids, are experiencing rapid growth in new developments and revitalization projects.

Coming away from this year’s Energy Summit, we are challenged not only to work toward improved sustainability and energy efficiency in new development projects, but to recognize patterns of environmental inequality in our State’s low-status communities who are often left behind as our cities trend toward healthier, more sustainable futures.

A green future for all means bringing every voice to the table in the planning process. Leaving our underserved communities out of the conversation while planning for the future of our cities would be a disservice to the greater Michigan community because it suppresses perspectives and ideas that make each neighborhood unique and allow for place creation. A green future for all means ensuring that everyone has access to the resources they need to reach that goal. It also means empowering and inspiring Michigan residents, from low-status urban neighborhoods to underserved rural communities, to invest in their ideas and make their communities into places they would aspire to live.

For more information about Majora and her work, visit MajoraCarterGroup.com