With a lack of consensus or political will at the federal level making the climate change conversation downright “chilling”,  Michigan is rising to the occasion to serve as a sustainability example to the midwestern states and local leaders are emerging to present their roles as part of the solution.

The Michigan Energy Summit is a celebration of the Michigan Battle of the Buildings program created to connect building owners and operators to available tools and resources.   As the only state-wide competition of its kind in the nation, the growing success would not be possible without impassioned building owners and operators, visionary supporters like DTE and Consumers Energy and other generous sponsors*.

More than 230 Million square feet of real estate across Michigan are united by the competition and together have saved $14.1 Million since the program launch.  These entities win not just for “bragging rights”, but because they are saving significant money while contributing to lower carbon emissions from their buildings - a win-win-win for all.  See the 2018 Michigan Battle of the Buildings Biggest Losers HERE. 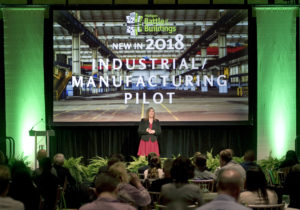 Cheri Holman, Executive Director for the USGBC-WM, opened the summit with a look over the last 5 years of competition which has recognized 94 buildings as the biggest losers across Michigan.  In all, 72 buildings have reduced at least 10% and 18 buildings have reduced 20% or more over the course of a single year. These savings translate to 135,673 metric tons of carbon equivalent or 17.2 Billion smartphones NOT charged.

Both Teri VanSumeren, Executive Director of Clean Energy Products for Consumers Energy, and Terri Schroeder, Manager of Clean Energy Business Development for DTE, spoke of their respective utility’s efforts in building a more sustainable and resilient utility.  Due to a number of factors, both utilities indicate they are on track to meet and exceed Michigan’s 15% energy from renewables by 2021. Schroeder stated that DTE plans on producing 50% clean energy of all energy produced by 2030.  Certainly such a statement is a major shift in utility perception using renewables.

The benefits of reduced energy consumption aren’t just for large corporations and portfolio owners. Small business owners who manage utility costs can free up capital that will increase the sustainability of their operation.  The Michigan Energy Summit highlighted three Grand Rapids-based companies that are reaping the rewards after conducting energy audits at their buildings. SanChez Bistro incorporates a commitment to green practices and empowers their   Salsa Verde Sustainability team to raise awareness that will help them stay on track.  Supermercado Mexico is challenged with operating grocery stores known to be one of the highest energy consuming sectors. Grand Rapids HQ understands that every dollar which is not spent on energy can be used to forward their mission of helping youth who are experiencing unsafe or unstable housing.  Read more on these small businesses HERE.

Does the typical EUI (Energy Utilization Index) of measuring BTU per square foot make sense for all building types?  What if you are a manufacturing facility that has significantly increased production or added a third shift? This can raise the EUI of your building without taking into consideration the operational changes that are occurring inside the facility.

Experts from GM, FCA, the EPA, and the USGBC-WM led a working group to discuss the new Production Normalization Pilot rolled out in early 2018.  Through a partnership with EPA’s EnergyStar Challenge for Industry the pilot encourages energy managers to explore alternate metrics that can provide better insight to how the company is managing its energy use.

Click HERE to read how representatives from FCA Chrysler and General Motors are using production metrics to normalize the energy fluctuations of their processes.

Led by Dave Heinz of Odawa Casino, this session featured discussions of recent and ongoing energy and renewable projects in Michigan, including a campus wide geothermal system at Monroe County Community College as discussed by Jack Burns.  An extensive deep energy retrofit of the Amway Grand Plaza as reviewed by the project manager, Sam Lampe and a look into Fifth Third Bank commitment to power 100% of their portfolio with renewable energy explained by Jeremy Faust. 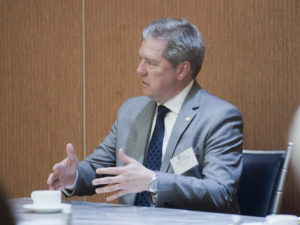 Another recent project highlighted was the award winning Solar Carport Project at Michigan State University (MSU). Dr. Wolfgang Bauer, Professor and Physics Professor and Associate Vice-President for Administrative Services at MSU, discussed how the project, deemed the largest solar carport in North America, has exceeded all expectations.  The carport services 12,000 commuters daily, covers 45 acres, 5,000 parking spaces and features 40,000 solar panels. It now generates power to run 5% of MSU’s annual energy consumption, equivalent to the power use of 1,800 Michigan homes. Dr. Bauer commented the solar carport array will save MSU at least $10,000,000 dollars over the next 25 years.  What was most illuminating was Dr. Bauer’s following comments that “Green power is now cheaper than brown power.” Very revealing!

Other sessions at the Michigan Energy Summit included a look at  Green Building Certification Pathways. Renae Hesselink of Nichols  led a lively discussion on high performance buildings and the choices in third party certifications from LEED to Living Building Challenge to Passive House.  Also represented were the incentive and loan programs offered by DTE, Consumers Energy, Lean & Green Michigan and Michigan Saves.  Make sure you know how to access these resources and don’t leave money on the table!

While the entire day was truly inspirational, work lies ahead of us to sustain Michigan’s ecosystem, and time is running out.  For as vast as the manifestations of climate change are, the solution will be a multidisciplinary fabric to which everyone is not only meritted a seat at the table, but is needed. 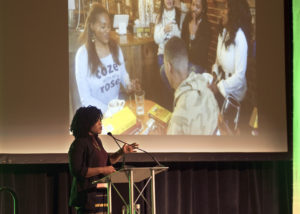 The lunch keynote address by Majora Carter tackled this sensitive issue pointing out that sustainable development and environmental equality are paramount and must be cohesive if we want the best results.  Majora’s powerful message that “you don’t have to move out of your neighborhood to live in a better one” is a testament that successful urban revitalization must include a collaboration of all parties involved - most importantly the residents of that community.  Click HERE to read more on Majora’s keynote and her Idea to Reality Workshop hosted at the Summit.

Raising awareness and actively participating in interdisciplinary sustainability efforts MUST unite as “one voice” to create a better place for our generation and for those that follow.  As we continue to update our aging buildings across the state we have the health and prosperity of our people to consider. These conversations and collaborations will continue as we focus on diversity and inclusion as a true measure of success.

Paul Hawken of DRAWDOWN, the most comprehensive plan proposed to reverse global warming, promises to deliver its recipe of solutions and action items on September 25, 2019 in Grand Rapids. For more information on this upcoming conference click HERE.

*Other Major Supporters of the Event include:  The Michigan Energy Office, The Detroit Lions, Bergmann Associates, Founders, R.L. Deppmann and Odawa Casino.